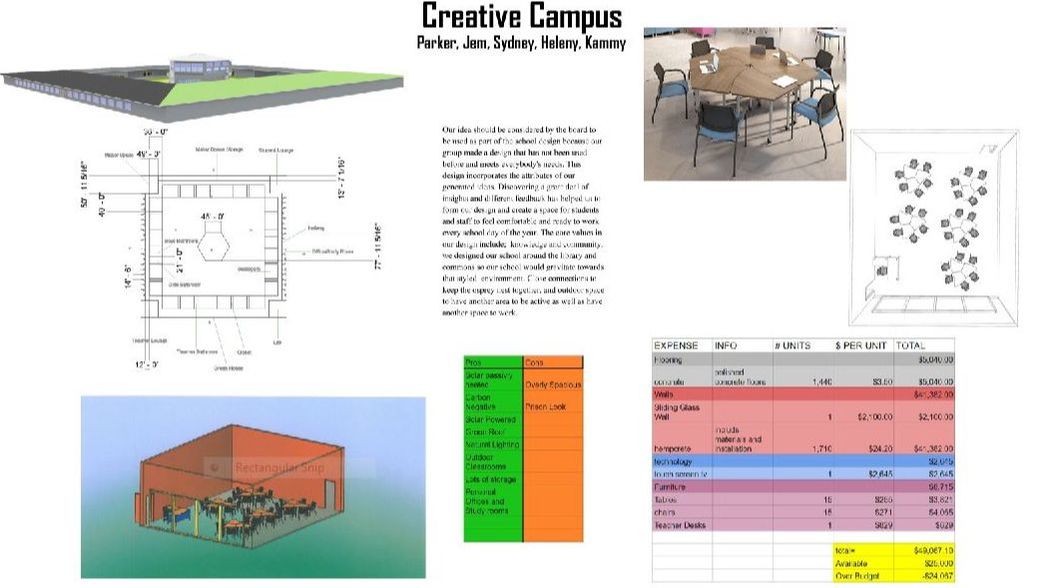 In this project, each group was tasked with creating a high quality set of architectural plans and renderings.  Through the process of design thinking and peer critique, we created these plans as both architects and engineers.  The final designs were shown to the teachers, students, parents, and community members of AHS.  The final products were shown to the board of directors.  our final designs included a layout for the entire campus, an individual room design, and estimated budget, and a project proposal.

This project was the first time that I had experienced 3D design.  I learned that SketchUp designs wasn't where the process stopped.  For a really high-quality project, you would take the SketchUp design in multiple orientations and put it into a rendering software.  This would smooth surfaces, enhance materials, and add light sources.  Even after that, there is still the task of importing these rendered images into Photoshop where you could add people, backgrounds, and even weather.  Personally, I really thrived under the challenge of making the professional grade SketchUp files.  Even though it wasn't mandatory, I made an entire school draft in three dimensions, a process that took up many-out-of-school hours.

Over the duration of this project, we were working entirely in groups of between four and five.  When in a group, I struggle with not taking charge and doing the entire project myself.  In this project, I made a conscious decision to change this habit.  At some times, this was hard because there were people that would rather either not do any work or just do it to the bare minimum.  I feel like I managed relatively well in my goal to not take over.  I was able to help lead the group, and just play my part and not other's.  In this case, my part to play was in designing the 3D school design.

I think that this project really helped me in developing my crucial ability to interpret users' needs and incorporate them in the designing of a school.  However, the purpose of this project wasn't only to let kids play in SketchUp.  This project was a way for the students to have some voice in the designing of their campus.  Even if this campus isn't built until I have graduated, I will be happy that the design will incorporate some of the things that we students see as an obvious, but the teachers and architects might not even consider.